Rat Salad is back in black on Trushmix with a very special in-deep wild motorbike-ride into the many corners of Rock and Roll, safety-belts are left home for the wimps. Those of you familiar with the evolution of Rock music from 60's Garage via 70's hard rock, boogie, sleaze, heavy and punk and finally 80's trash and NWOBHM, will for sure find this mix satisfying from a R'n'R-connoisseurs perspective. Mighty rock-classics and hidden gems are both woven together by the very essence of rock and roll: THE RIFF! Rat Salad had a lot of spare time on his hands this time due to some unplanned couple of months in the big house. If the verdict had more to do with constant bar-trashing, being a notorious speed rowdy or humping the Majors wife…we don't know. But we're happy as long as he got the extra time to create this freedom worshipping rollercoaster ride from hell.

Put it on at any social occasion and find out who is a "rocker" and who's the ROCKER!

Rollin' the Freeway!
Riffin' like a Man!
Livin' Rock and Roll to the Max!

We're still waiting for his upcoming album which is ready for release soon! 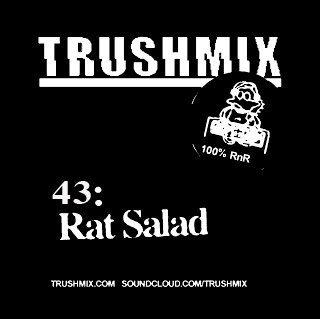 Posted by DJ Fett Burger at 5:32 PM No comments: