Rat Salad and his ex-bandmate José has after life-threatening drama, economic trouble, loss of property, more or less violent incidents and several other turbulences, finally decided to let by-gones be by-gones and lower their guards to a fresh start for their friendship. And hopefully also for their band.

It all started with José being up to his neck in deep-shit debt to almost every biker-gang possible…due to his poorly administered crack dealing business. José, desperate and strung out, crawled to the cross asking his old buddy for help. Rat didn't wan't anything to do with José and literary tossed him out on streets again. José owed him money already. Earlier, Rat had payed all the studio-time for their now legendary demo. But José had never payed his share. Not to mention every other loan he had never payed back during all the touring they had did together (he has expensive habits). José had to make a choice. Despite feeling awful betraying his old friend once again, he broke into Rat Salads house while he was asleep. He knew he had treasured goodies there that every rocker in the street would kill for. When Rat awoke from last nights rock´n´roll and boozing he couldn't even find his "good morning" bong. All his gear, amps, guitars (signed by all the greats in r'n'r history), his bike, all his vintage leather jackets and even his entire record-collection was gone.
Rat was broken, what was he to do? His whole material life had gone up in smoke! The word was put out on the streets and the entire rock-community was now on the look-out for Rat's stuff. In fact no one would dare to take his belongings themselves. After all he was the most respected rocker in town. José had painted himself into a corner. He had given most of Rat's treasures to the local bikers to pay his debts. But what if it was known amongst the other rockers what he had done? José needed an alibi. There was two boxes of records left from Rat's collection. Both of them obtained rare demos, 7"'s and albums given to him by fans, friends and bands he met on the road, touring around the world. The UK, France, Belgium, Germany, Norway, Canada, Poland, The States. One box dating from '77-'85 and the other one from last years tour. Strictly underground garage-punk-r'n'r!
He knew Rat had significant sentimental value regarding those record, stuff you wouldn't so easily find unless you go to the auctions. He soon delivered them back to Rat, who in an instant forgave him everything from the past. He had never suspected José being the burglar in the first place and couldn't imagine him being the one responsible for all his losses. Rat simply couldn't understand the situation as anything else than his best friend giving him back the scraps of his belongings. Who other than good ol' José would go search the whole city for some of his favorite lost records?Oh what a great pal José is! Rat swiftly suggested that they should get together again and start playing together just like the good old days! And they haven't been out of the studio ever since! Rat Salad has yet to learn the real truth, let's hope they finish the new record before he does!

This mix is made out of music from the aforementioned two boxes of records José returned. Rat said he needed to preserve the music in a mix, in case they were lost again. '77-'85 is off-course the post-punk era. So it's time for the rockers with the short hair and the lean jeans. The rockers that in the name of anarchy just as well play the synth as the guitar, puts on a reggae or funk beat and has a drum machine as one of the band members. Punks, hooligans, unemployed geezers up to no good, art school drop-outs and drug-dealing street-rockers. Some of them with more central-stimulating drug-habits and mind you, a few more books at home than most other rockers. The second of Rat's boxes included more recent records by bands inspired by exactly this aforementioned generation. All strongly rooted in the D-I-Y philosophy of punk rock.
So dive into a real underground rock and roll experience and join Rat Salad down the memory lane in punk rock. Hope you'll enjoy it as much as we do! 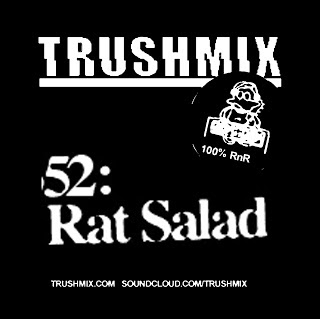 
Big up for the first trushmix of 2014. This time we welcome Øyvind Morken straight out of Oslo, Norway as our special guest at trush. Mr Morken, tastemaker of the underground Oslo club scene has provided us with an awesome house infected party mix. This is a perfect start for this new and exiting year. One hour with music from the top that will rock the dance floor.

If you're in Oslo be sure you catch this guy behind the decks once or twice a week.
Party maximum guarantee!